A stroll on Mount Royal

I invite you to follow me on a stroll through Mount Royal Park, the heart and lungs of the island and the City of Montreal.  Let's note in passing that it is to Jacques Cartier that we attribute the current toponymy.  In 1535, during his second visit, impressed by the landscape, he declared the mountain "Mont Royal".  By extension, the ten hills that appear on the St. Lawrence plain are Mons Regius, the Monteregian Hills. 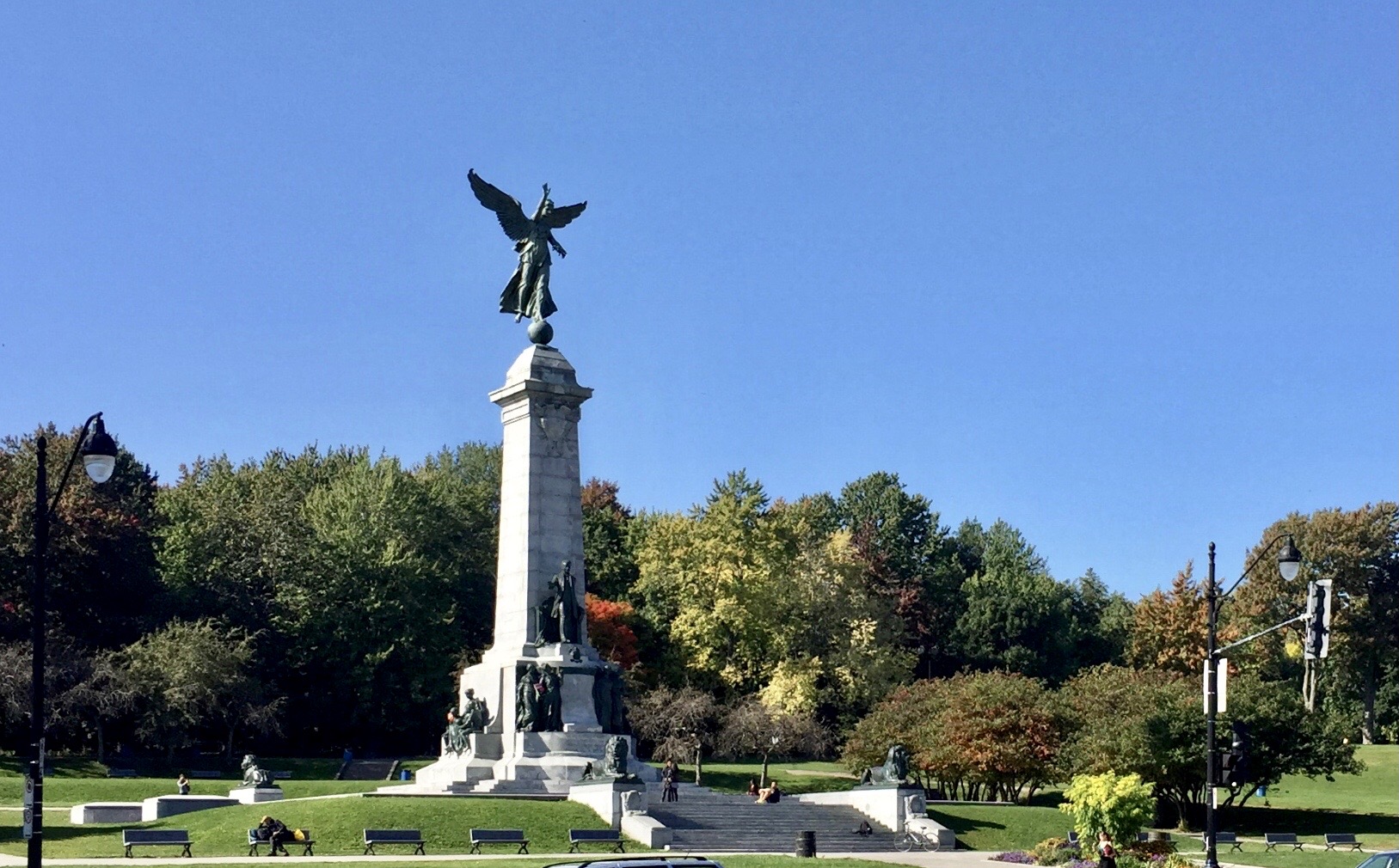 Meet at Avenue du Parc, just south of Avenue du Mont-Royal.  For Montrealers, this place is often called the Angel of the Mountain, in reference to the tallest statue of the Monument to Sir George-Étienne Cartier found there.  At more than 30 metres high and with 18 bronze figures, sculptor George William Hill did not hold back when celebrating the life and legacy of one of the Fathers of Confederation.  A little technicality, it would not be an Angel that we find at the top, but The Fame, a winged allegorical figure. 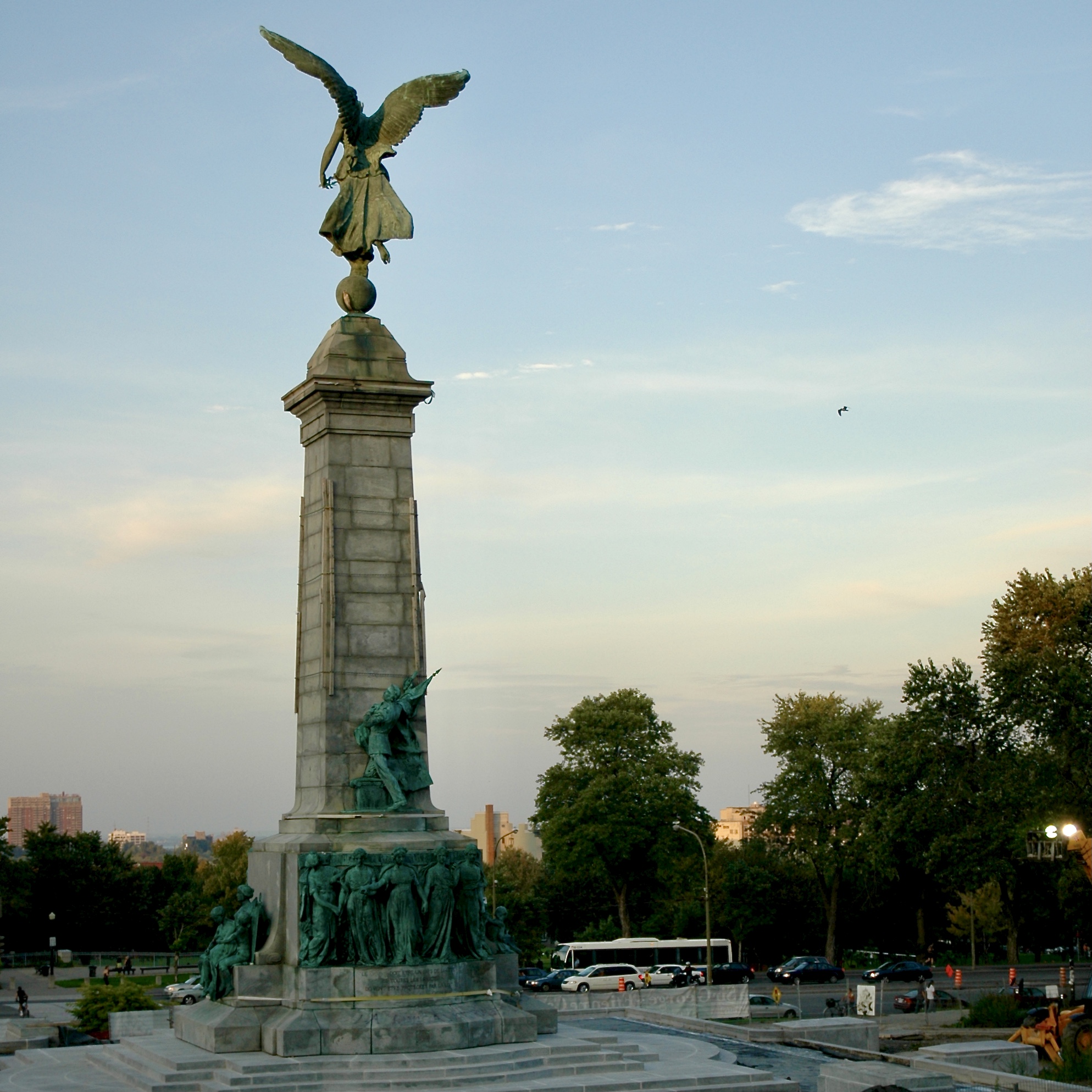 It is probably not out of patriotism but rather out of gregarious instinct that many Montrealers gather there (in normal times) every Sunday for the famous Mount Royal Tam-Tam. This unofficial festival which, according to the City of Montreal's website, "welcomes a colourful crowd of drummers, dancers, vendors and onlookers of all kinds".  The surroundings are rocked by the rhythmic sounds and the scent of patchouli... A must-see and must-experience activity, at least once! 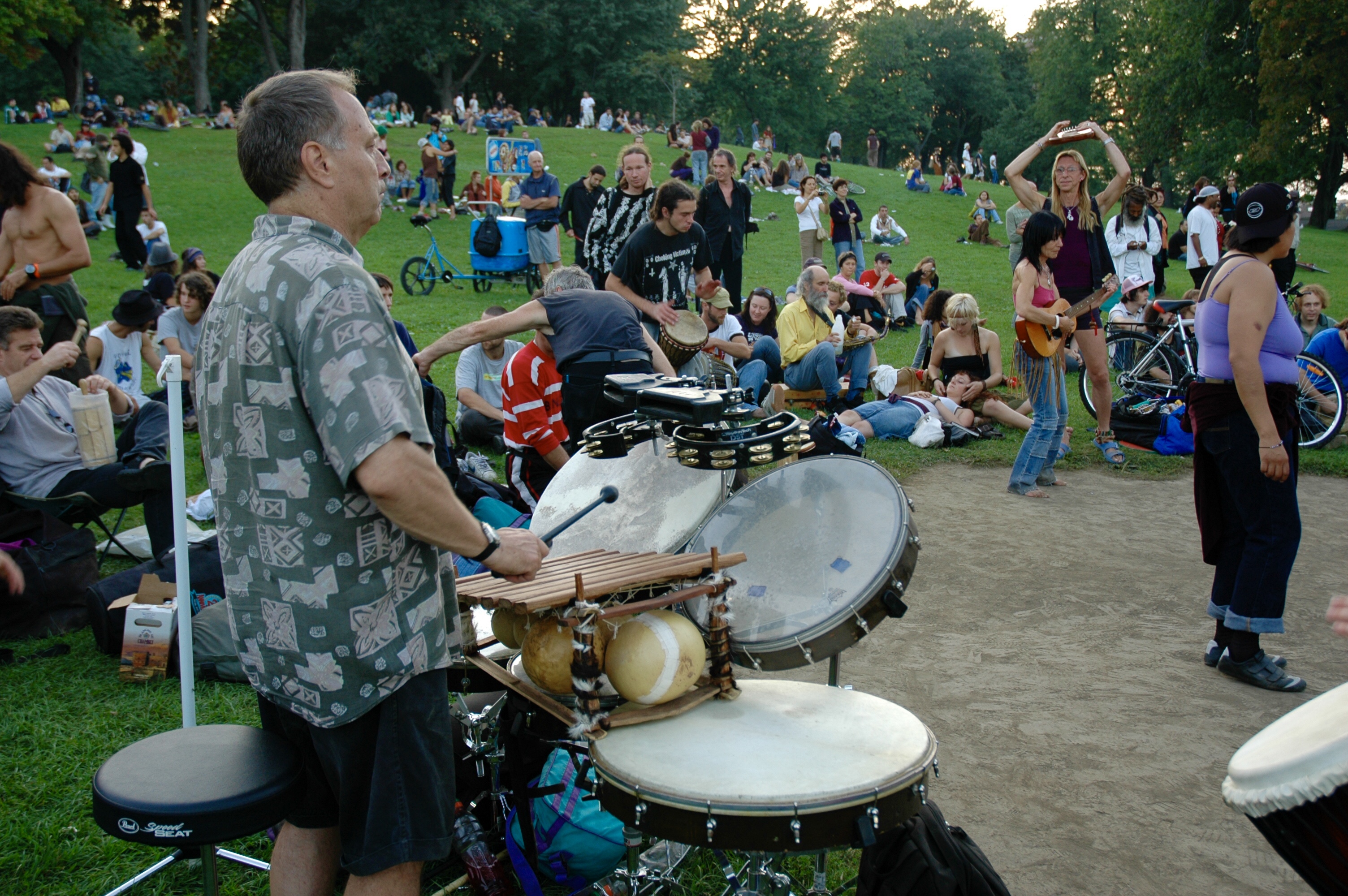 Ready to go?  It's time to take the Olmsted Trail, a 4.5km long path that will take us up the 120m to the summit.  The name of the trail is a tribute to Frederick Law Olmsted, the landscaper who created the park.  He is also known for having designed Central Park in New York. 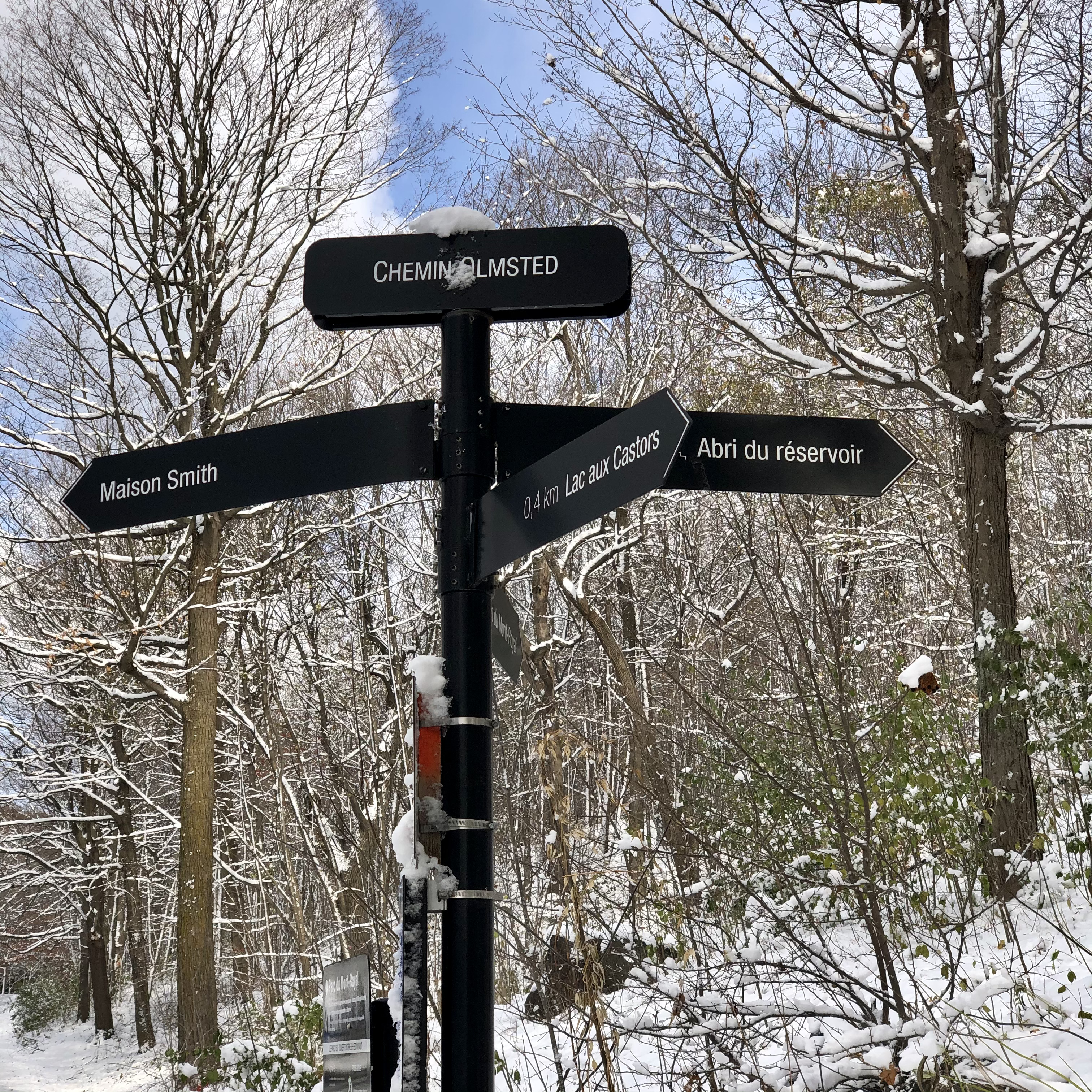 His project was not without opposition, as many wanted to raze the mountain and make it more urban... Other times other priorities. 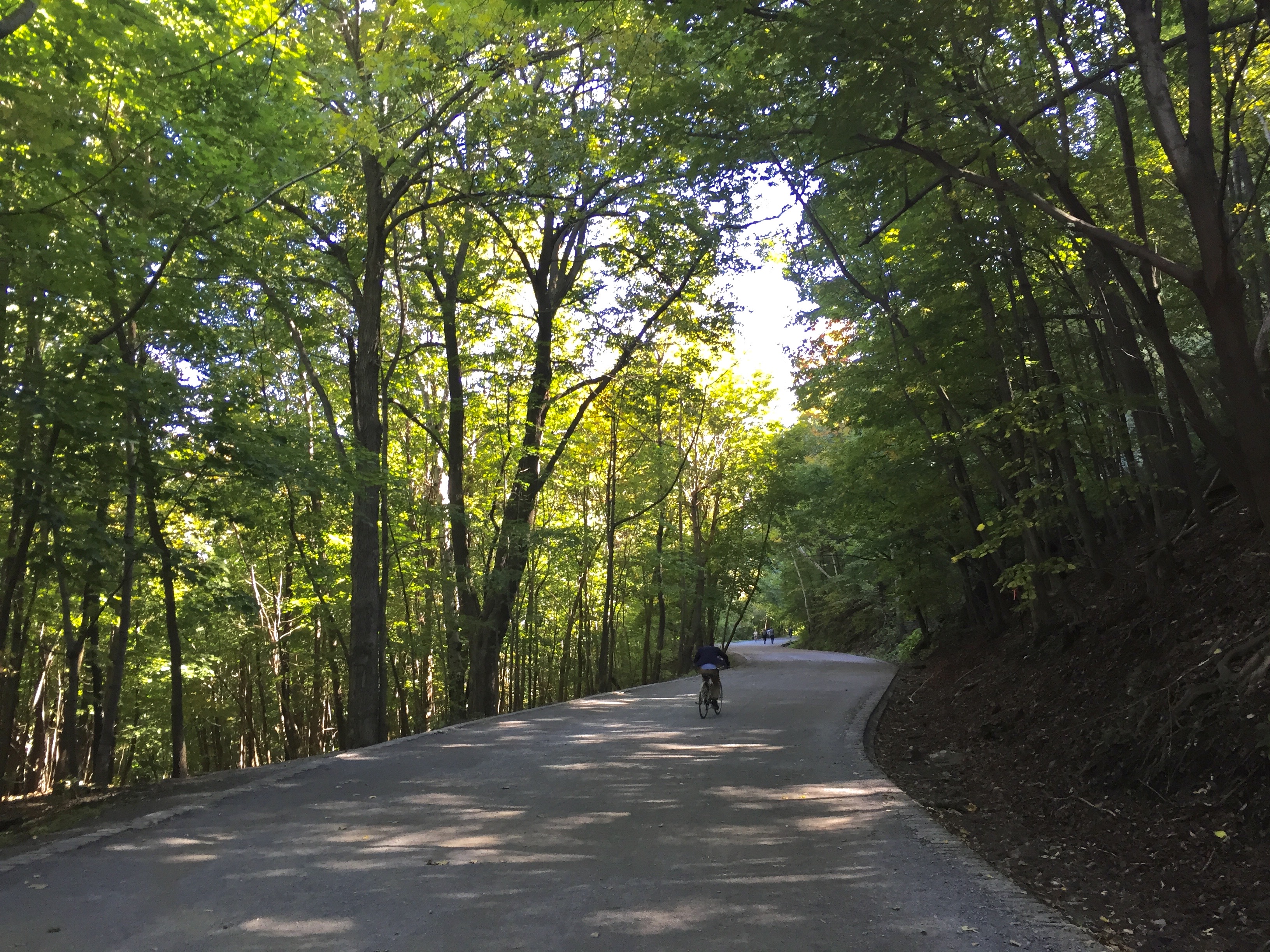 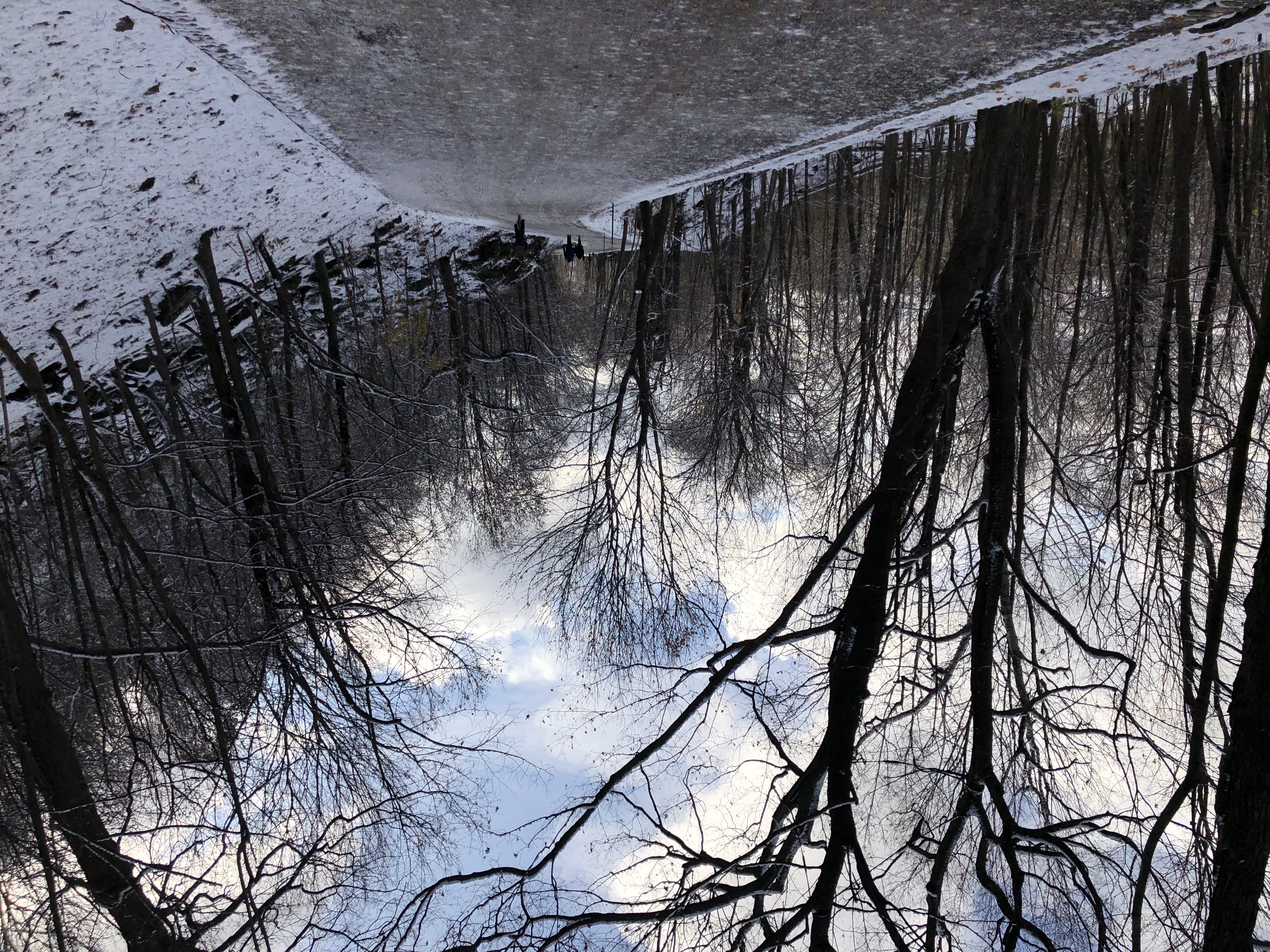 Four stops to be made on the mountain:

This artificial lake is the only body of water on Mount Royal.  It is located on an old swamp but was constructed (concreted) in 1938.  Mild winters, unfortunately, forced the city to ban skating a few years ago. The gentle hills around it are perfect for picnics.  Take time to appreciate the zig-zag roof and abundant windows of the very modern Pavilion, opened in 1961. 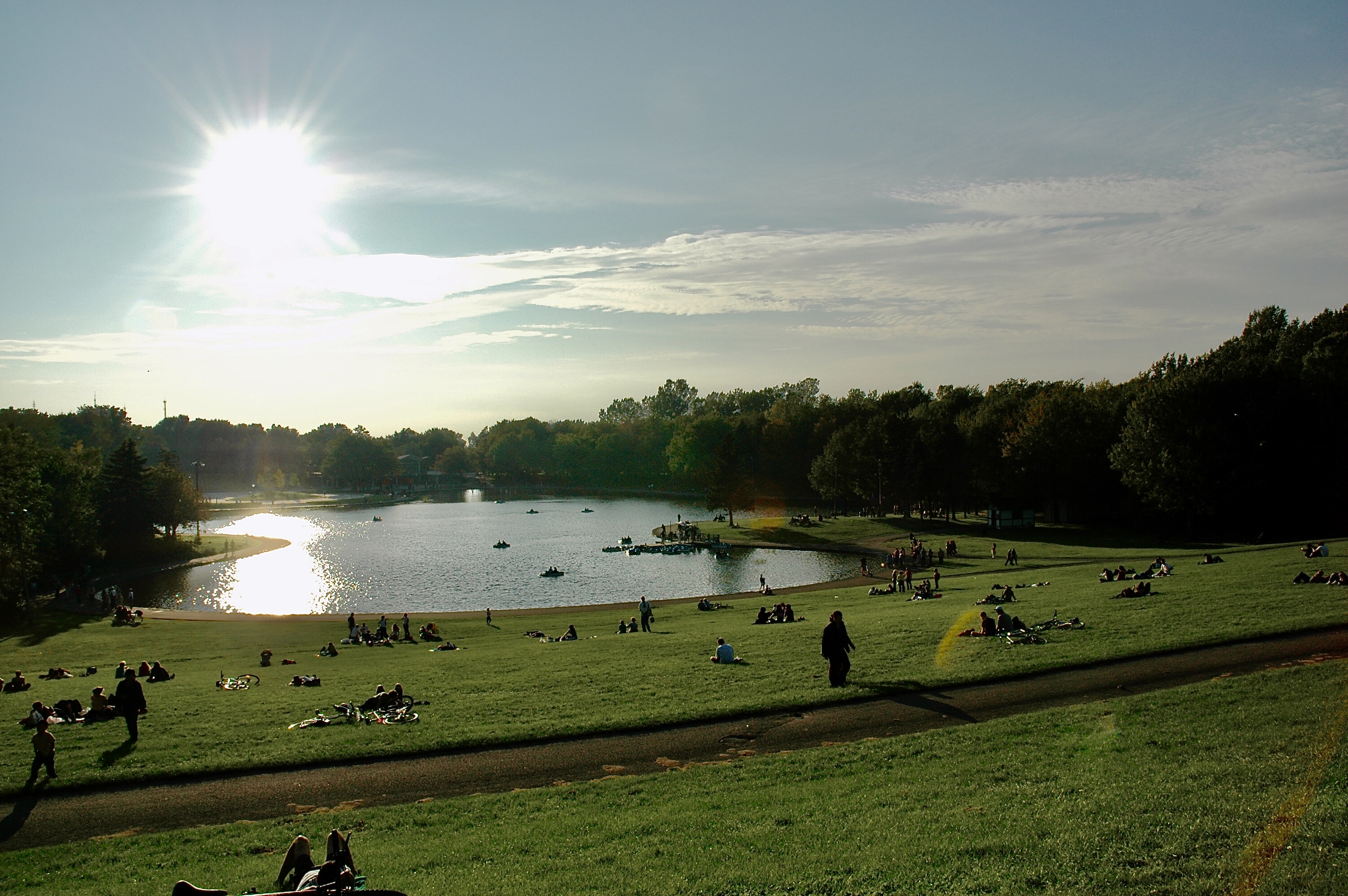 This large and striking lookout is a must-see when visiting Mount Royal.  In any season, at any time of the day, the view is breathtaking!  Behind you stands the Chalet du parc du Mont-Royal, built in 1932.  In an innovative style that combines Beaux-Arts and Arts & Craft, it reminds me of a Forbidden City-style pavilion, with its long horizontal lines and clay tile roof. 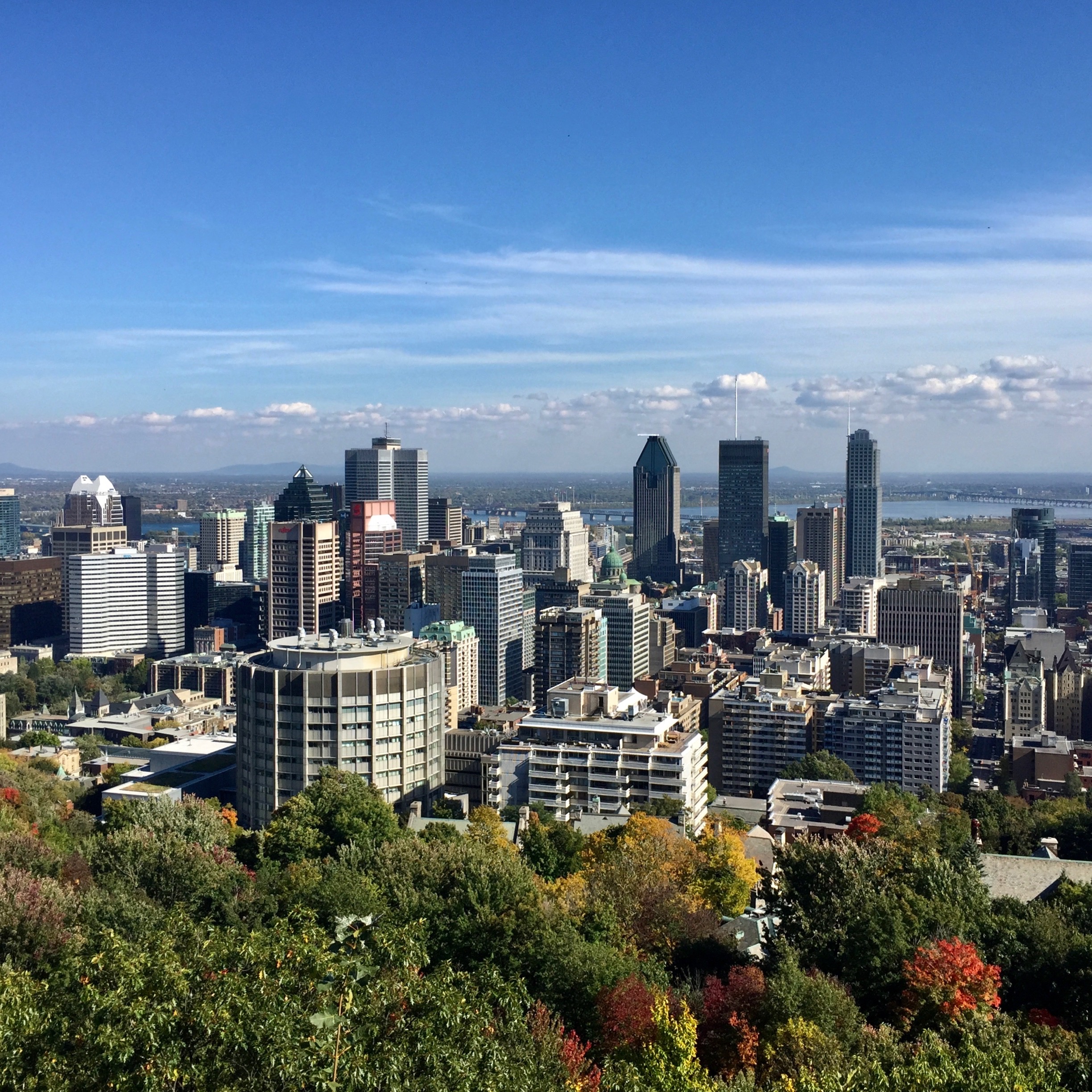 From the lookout you can see the large geodesic dome of the Biosphere on St Helena Island in the distance.  Also, a view of two other Monteregian mountains, Mont Saint-Hilaire and Rougemont 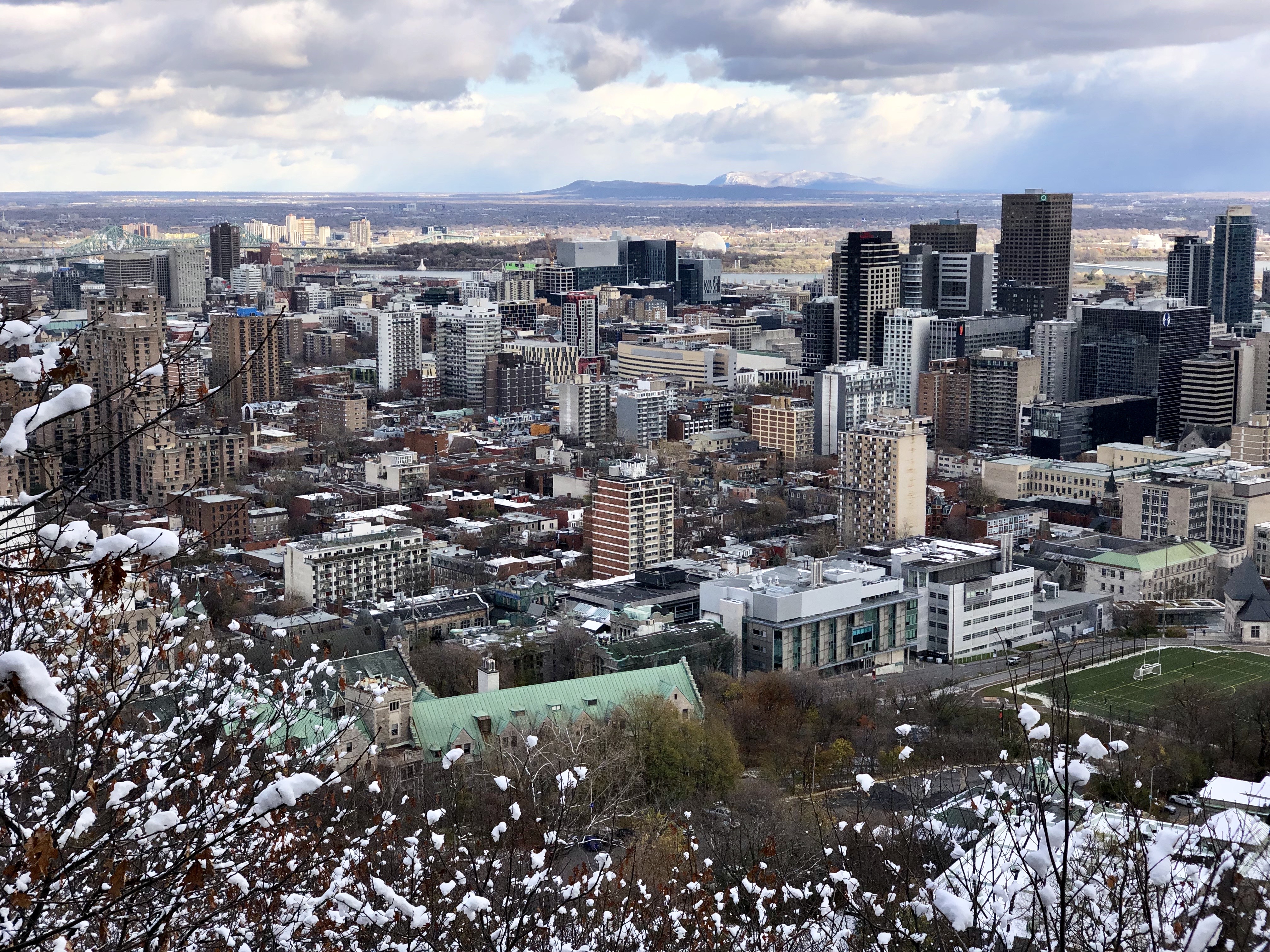 Seen up close, the cross looks like a chimera between an electric pylon and a Christian cross, not exactly a symbol of grace and elegance.  It is because this monument, inaugurated in 1924 in memory of the wooden cross erected by Paul Chomedey de Maisonneuve, is meant to be seen from a distance!  In fact, it is only the upper half that is illuminated at night.  Together with the flashing light of Place Ville Marie, these are the two night-time symbols of Montreal's summits.

It is on the north-western flank of the mountain that we end our long walk, at Saint Joseph's Oratory.  Much more than a simple church, it is an entire religious complex, with chapels, basilica, Way of the Cross, carillon, museum, crypt, and shop.  The style is very evocative of its years of construction, with an inauguration in 1967; neo-classical-renaissance-big-dome.  My favourite details are some of the stained glass windows, both traditional and modern. The more cynical would say that it is a tourist racket at the expense of the gullible, believers bring their sorrows and pains there in the hope of alleviating them, the choice is yours!  Normally over two million people visit the site annually, but the vastness of the site and the long opening hours make the crowds very easy to avoid.  That's the end of our walk!  Tired? the Côte des Neiges station is only a few minutes away! 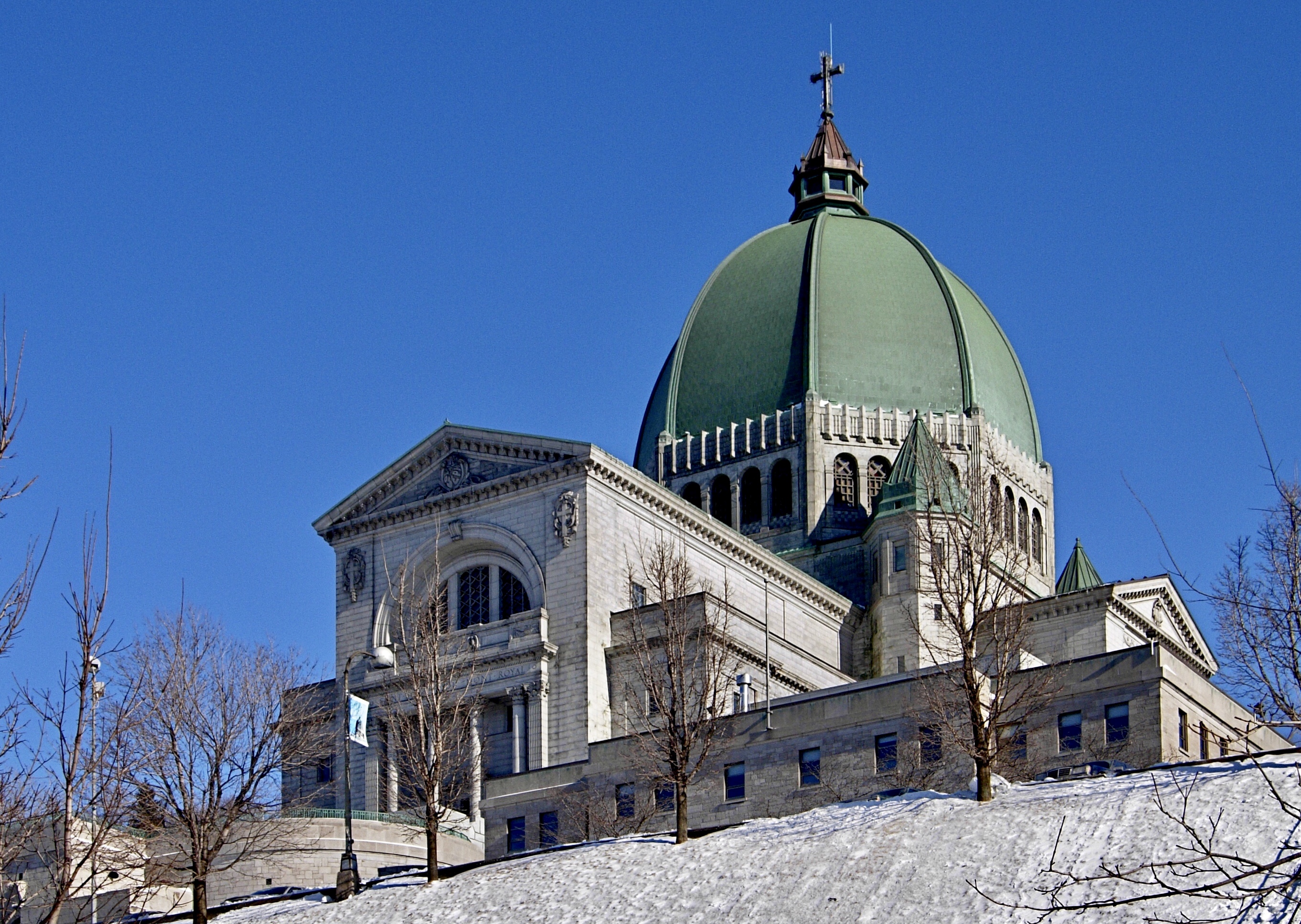 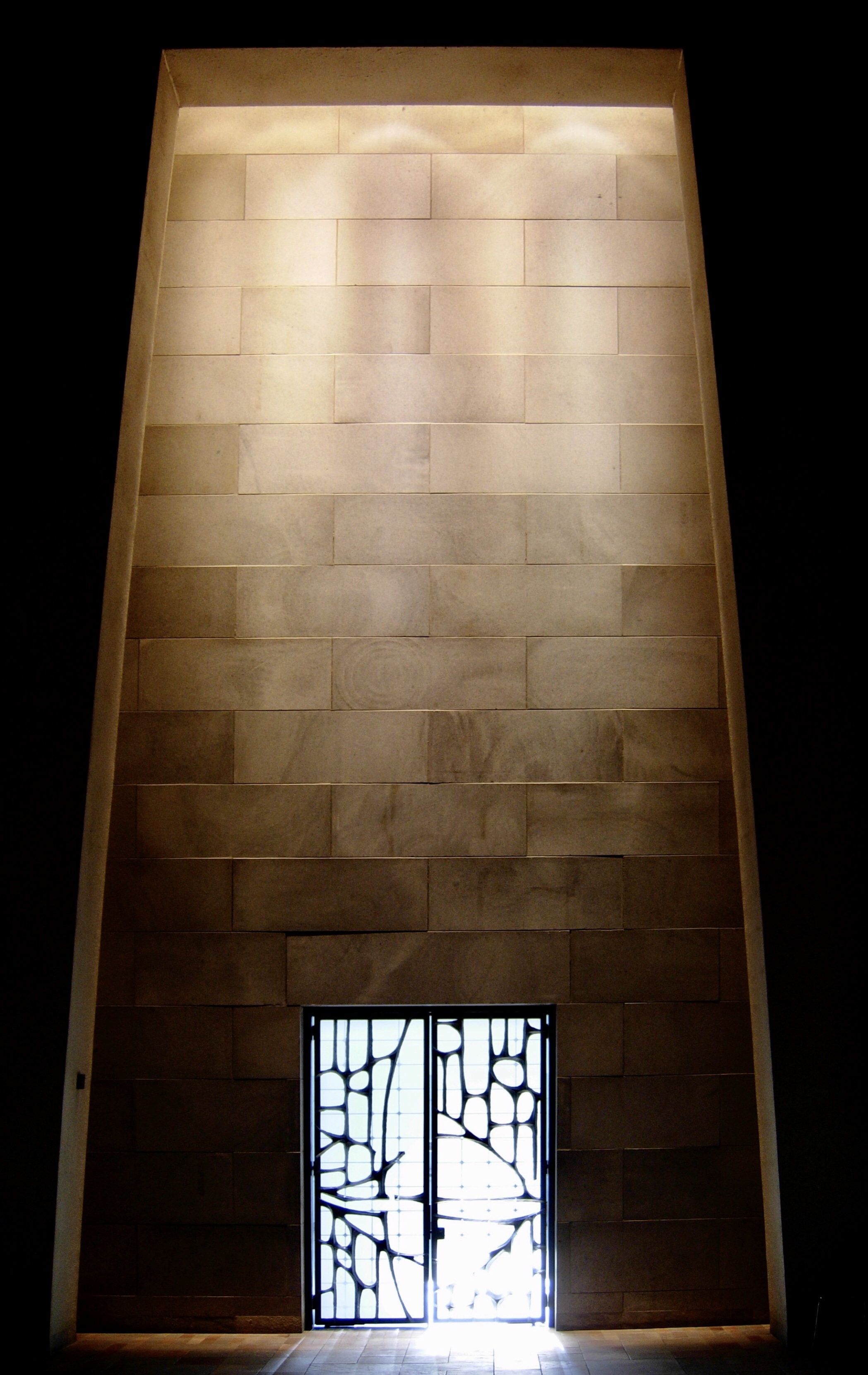 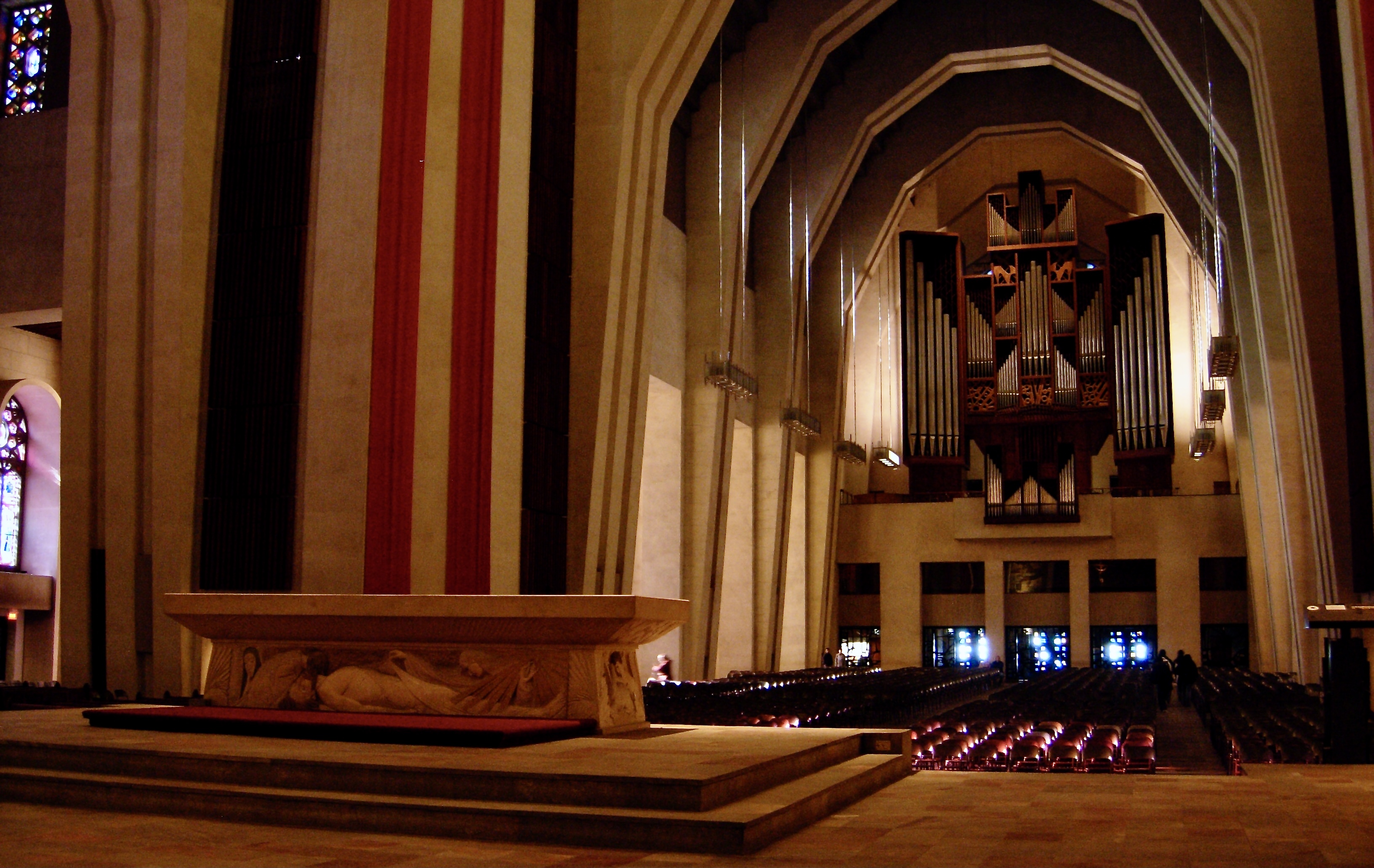 Want a souvenir of your journey?  Click here for the patches of the "Stroll on the Mountain" series!